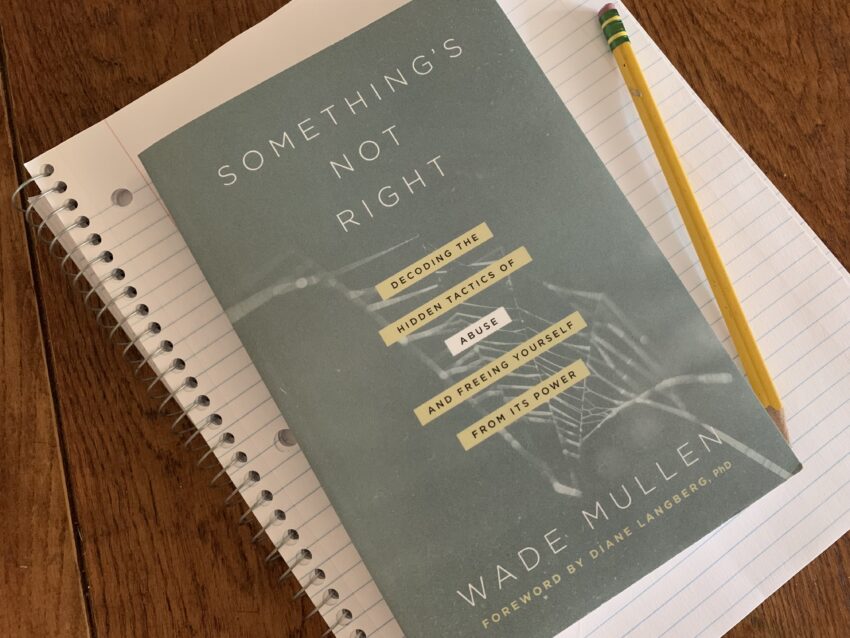 Normally my book reviews can be found in my quarterly reading lists. But since this blog hopes to address spiritual abuse in particular, here is a more thorough review of a book that addresses the same topic.

Update – If an entire book seems a bit much, on July 20, 2022, Julie Roys posted a talk given by Wade Mullen titled “The Power of Truth and Sincerity.” It speaks to many of the same themes traced in his book. Audio, visual, and transcript are all available at Julie’s website.

I found the book helpful. It touches on abuse in a variety of contexts, from individuals in marriages or friendships, to institutions like churches and workplaces. Chapters follow a logical pattern, are well organized, and conclude with a summary page for quick reference. Definitions and abstract concepts are accompanied with stories gleaned from Mr. Mullen’s research and personal experiences to better illustrate ideas. And the appendix includes lists of resources for survivors and advocates, both.

What I appreciated about Mr. Mullen’s book in particular, compared to others covering the same topic, is that it not just defined and identified spiritual abuse, but gave concrete action steps for getting out of it, addressing it, and recovering from it. Which fits with the subtitle of his book, “Decoding the Hidden Tactics of Abuse and Freeing Yourself from It’s Power.”

Responding to Some Quotes

The identification of an abusive individual’s desire to retain power seems spot on, to me.

And the tactic of deception was one of the first clues I had that things were not well at the church we left in 2020. The church was congregational and held its annual business meeting for members to vote to approve the annual budget and the incoming elders. The very next Sunday, it was announced that the worship pastor was being let go, pastoral staff was being reorganized, and the church was heading in a new direction. Rendering a significant portion of the budget void that the congregation had just voted on. None of these are decisions that were made in the space of a week, meaning that top leadership deliberately withheld the information during the annual business meeting in order to avoid having to respond to questions and possible pushback in a public, formal setting.

Deception can also have a more “positive” spin. When David and I were at Mars Hill Baby Church, any update regarding monthly offerings and expenses was accompanied by “everything is going well.” Despite expenses being consistently higher than giving. The deception was staring us right in the face. But still caught most of the congregation (and allegedly the leadership) by surprise when the church nearly became financially insolvent.

I sat in one meeting where senior leadership… presented a catalog of wrongs, which looked like an act of tremendous transparency. They were thanked and applauded for it. But the most disruptive information – the facts that would have disclosed the full extent of the abuse – remained a secret. The audience’s approval was based on a limited view of the situation. It was obscurity disguised as transparency.

This particular section by Mr. Mullen actually put words to a situation David encountered with the pastor at the aforementioned church we left in 2020. Even though we’d left the church, David remained a part of a communication platform used by our former Sunday school class. In the men’s channel, a political discussion came up. David pointedly but diplomatically chimed in, pointing out that there were a variety of viewpoints represented in the group but all could still “glorify God and influence society enabled by the love of Christ.”

The pastor made some very heated remarks in response to David’s message, including phrases such as “It’s a defining mark of a true followers [sic] of Jesus…. The true Christian proclaims [one particular viewpoint]… Please don’t vote [for the other viewpoint] and say it glorifies God!” And “Make sure you vote… it’s pretty simple… there is only one vote that is right in Gods [sic] eyes.”

David responded that the particular candidate (over whom the original discussion was about) had openly said that the political issue the pastor had so heatedly brought into the discussion was not even on the political candidate’s priority list. David pointed out that “things like character and caring for the oppressed are very valid considerations. [Our state] needs changed hearts, more than changed votes. Hearts are not going to be changed by the arrogant, abrasive way you have treated my wife, myself, and others I love who have dared to offer a differing biblical perspective. Please don’t treat people this way and say it glorifies God. We have chosen not to be part of a narrowmonder[ sic] fear-mongering faith like that peddled at [this church].” David then removed himself from the communications platform used by the group.

To his credit, the pastor reached out via text individually to David later. The pastor apologized for how he communicated and said, “It is 100% my fault and I want you to know that in no way was I inferring or meaning to infer that you are not a true follower of Christ… I have communicated the same thing [to the rest of the group who saw the discussion].”

Anyway, all of this context leads up to my ah-ha moment reading Mr. Mullen’s note about selectively disclosing information that improves the abuser’s image.

The very next Sunday after this communication, the pastor briefly mentioned in his Sunday sermon that he had “said some things I shouldn’t have” in a discussion and had to later apologize for what he’d said. It dovetailed nicely into the topic of the sermon, which I don’t specifically remember at the moment.

But listening to the pastor’s words in that sermon left a bad taste in my mouth. Because the pastor came off looking like the hero who had manned up and apologized. Because he didn’t offer any of the pertinent details of what precisely he’d done wrong. “Obscurity disguised as transparency,” as Mr. Mullen described.

What the pastor didn’t say to the congregation was “I told someone that they were not a true Christian because of how they voted. And that is wrong, especially in today’s extremely polarized political environment.” The pastor also didn’t say, “Furthermore, I was harsh and abrasive with my words. So much so that this person said that his family has left the church because of how I’ve treated them when they disagree with me.”

Though I in no way equate harsh words from a pastor with physical rape, the pastor’s “confession” came off more like that of Andy Savage “confessing” to an “sexual incident” with “a high school senior” without calling it “rape.” (If you’re not sure whether it should rightfully be called “rape,” please watch this video from Sheila Wray Gregoire.) Or the pastor who more recently admitted to “adultery” that occurred “twenty years ago,” and was given a standing ovation by his congregation for his bravery and humility in publicly confessing. Only to have the woman involved literally walk onto the stage and tell the congregation that she was sixteen-years-old at the time of the “adultery.” In each of these three incidents, the abuser comes off looking like a hero, at least initially. Because in all three incidents, he neglected to include all of the pertinent information in his “confession.”

Once you are able to identify that what you are seeing is a demonstration tactic [of false repentance on the part of the abuser], you can look closer and see the heart of the individual or organization between the lines: narrow-mindedness, arrogance, and an insistence on leading are tell-tale signs the demonstration of change is only for the sake of repairing an image, not a genuine change. They will do only what is needed to survive the scandal instead of doing all they must to make amends. They will be unwilling to consider all the factors that might have contributed to their abusive behavior when pushed. They alone will determine what is up for discussion and what is not.

Many who simply want to demonstrate their right to continue to have power will act out of an overconfidence in their understanding of the wounds and what is needed for healing.

The phrase “an insistence on leading” is what stood out to me, here. This seems to be what separates the truly repentant from the chaff, doesn’t it? Mark Driscoll stepping down instead of submitting to his church’s plan of restoration. Bill Hybels retiring instead of facing his accusers. Those in the SBC’s executive committee who resigned rather than waive privilege. Then, on the other hand, there are Tates Creek Presbyterian Church and those left behind at The Crowded House after Steve Timmis left, who submitted to independent evaluations after allegations of abuse surfaced.

Healing isn’t as easy as replacing old ground with new territory. We have to work with what we have, and some roots and structures are not going anywhere, so we learn to grow beauty around them. Recovery is like that. It’s not a strict replacement of parts – a new piece in place of the broken piece. It’s more like taking a feature that by itself is ugly and unwanted but is repurposed when placed within a larger context of beauty.

I have nothing to add, here. This just seemed like a good note to end on, with some food for thought.